The truth about Jury Service 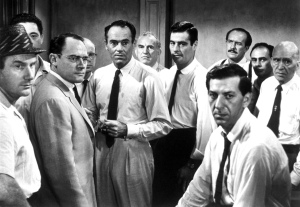 January 2014. Although it was a bit of a pain organising things at work around this, I was quite looking forward to participating in the justice system. Doing my civic duty and all that.  I even watched the classic film ’12 Angry Men’ as part of my preparation…

So I have just spent the last two weeks at Croydon Crown Court.  Sadly, it has been a very disillusioning experience.

Before anyone gets worried, I am not about to disclose confidential information regarding a trial I was involved in.  In fact it would be impossible to do so -because the truth is that I never got to be part of a jury in any trial.

In terms of meaningful engagement in the criminal justice process, over the last two weeks I have done precisely nothing.

Instead of being actively engaged in our world-renown justice system, I have spent the time sitting in a waiting room, having cups of coffee, reading, checking emails on my phone, chatting to fellow potential jurors and eating at a subsidised canteen.

The experience it has most closely resembled for me is a departure lounge at an airport. But instead of the anticipation of a nice holiday, everyone waiting was simply looking forward to being told they can leave for the day.

Late on the first Monday, after a day of waiting, I was one of fifteen potential jurors called into court.  However three are discarded at random to create the 12 needed for the jury.  I was one of the three so I duly headed back to the waiting room.

It was in the waiting room I remained until Thursday, when I was picked to go into another trial.  This time we were told that this trial was likely to go on beyond two weeks.  Work commitments meant that this was impossible for me so I was allowed to go.  Back to the waiting room.

These two brief experiences turned out to be only times I was in a court room during the whole two weeks.  During the whole of the second week, I was not called for any jury at all – I just sat around waiting. There were lots of trials being cued up but they either seem to be delayed, collapsed or stuck in pre-trial legal arguments.

I need to say that the staff at the Court did their best to keep communicating with us. They did a lot of apologising for the situation. Other Jurors were saying things like ‘If this was a business, it wouldn’t last long’.  I had to agree.  I am no expert in what was causing the delays but with the days starting at 10.00am and ending at 4.30pm, with hour-long lunch breaks, the impression I got was of a pretty flabby system which needs a good shake-up.

I was interested to read the thoughts of the former Home Secretary, David Blunkett, someone a lot more clued up than me on such things.  It seems he had a similar experience and wrote this after he was called up for Jury Service in Sheffield:

“For my own jury experience left me staggered by the sheer waste of time and public money resulting from the chaos in our courts. Jurors had to sit around for days on end as trial after trial was cancelled because defendants or witnesses failed to turn up, or because barristers had double-booked, or members of the legal profession connived to stymie the judicial process.”

You can read the full article here: David Blunkett: Doing jury service has made me realise how cynical lawyers have reduced court to an expensive, shambolic farce

I would give the experience 2/10 – and that’s being a tad generous.  However, I know some people have really enjoyed their Jury Service and felt part of something important.

If you have done Jury Service how would you rate the experience out of ten and why? And remember, lets have the truth, the whole truth and nothing but the truth.