’12 Years a Slave’ and the ambivalent role of religion

Last night I went to see the film 12 Years a Slave.  I am still recovering.

The film focuses on the tribulations faced by Solomon Northup, (Chiwetel Ejiofor) a successful

New Yorker who is duped, drugged and sold into slavery in the southern states of the US.

It is a brilliant yet relentlessly traumatic film.  Northup’s switch from freedom to captivity is sudden: one day he is free and with his family, the next he is chained and held captive in brutal world where black people are simply a commodity to bought and sold.

Some of the hardest parts of the film are depictions of the barbarity of the worst plantation owners, particularly Edwin Epps (Michael Fassbender) who is repellently sadistic.   But as well as the raw evil of Epps, the hypocrisy and weakness of the ‘good’ owners is also portrayed. They may treat their slaves better but are equally committed to maintaining their subjugation.

12 Years a Slave brilliantly captures the vast systematic evil of slavery.  Violence and racism was a necessary tool to maintain the economic oppression vital to the ‘southern way of life’ in the 1800s.  The achievement of the film is that its draws you into the reality of the world that Solomon Northup is dragged into.  We journey with him as slavery envelopes his whole existence.

The role of religion

Unsurprisingly and unavoidably Christian religion is a key theme within the film.  It’s another 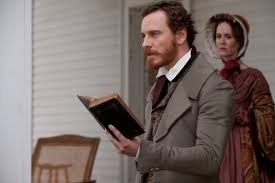 powerful reminder of the ambivalent role that faith played in the slavery of the US southern states.

On the one hand, we see the Bible being used directly as a tool of oppression.  In one scene Epps reads Luke 12:47 to his new slaves:

“And that servant, which knew his lord’s will, and prepared not himself, neither did according to his will, shall be beaten with many stripes.”

After he has read it, he waves his Bible in the dejected slaves’ faces and says “and that’s scripture!”  Within a ‘Christian’ culture the misuse of such passages gave a theological justification to Epp’s brutal maltreatment of his workers.

But on the other hand, the film also shows how the Christian faith of the slaves themselves is a source of solidarity, comfort and inner resolve.  In one of the most powerful scenes, Northup is pictured singing together the Negro Spiritual ‘Roll Jordan Roll’ together with others following the death of a fellow slave.  You can see in Northup’s face the way that the song is feeding him with sustenance and hope in the face of such brutality.

The ambivalent role of religion is a factor in most movements for justice.  Whether in Wilberforce’s abolitionist movement in the UK, Shaftesbury’s campaigns against child labour, the civil rights movement in the US or in the fight against apartheid in South Africa, Christian theology has been deployed on both sides.  It has been both a tool of oppression and resources for resistance.

But of course, this is simply a reality also reflected in Scripture itself.  Frequently the Bible speaks of God’s hatred of religion which maintain injustice. Amos is one of the most anti-religious prophets:

“I hate, I despise your religious feasts, I cannot stand your assemblies…Away with the noise of your songs! I will not listen to the music of your harps. But let justice roll on like a river, righteousness like a never failing stream” (Amos 6:21,23f)

In Isaiah we see the direct condemnation of religious practice alongside oppression:

“I cannot bear your evil assemblies.  Your New Moon festivals and your appointed feasts my soul hates…even if you offer many prayers, I will not listen. Your hands are full of blood…Stop doing wrong, learn to do right! Seek justice, encourage the oppressed.” (1:13-17)

And in the words of Jesus, we continually see a condemnation of those which conform to minor religious rules but ignores the wider purpose of those rules:

“Woe to you Pharisees, because you give God a tenth of your mint and garden herbs but you neglect justice and the love of God.” (Luke 11:42)

Religion has always been used to maintain injustice but that’s not the whole story.  In passages like these, generations of activists have found the most effective resources to combat injustice and work for a world where love of God goes hand in hand with a love for neighbour.

12 Years a Slave is not for the faint-hearted but it is an incredible film: a disturbing and epic tale of the way one man survives the kind of injustice which God hates.